Here is an excerpt from the homily I delivered this weekend – many people commented on the information regarding the orans position. 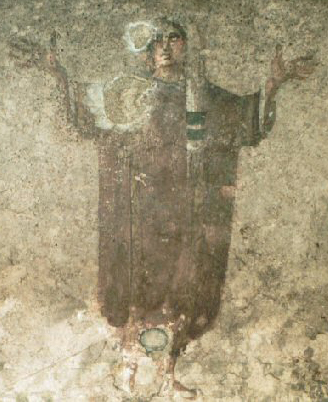 Have you ever wondered what’s so special about lifting up his arms, anyway?  I think it’s simply a method of Moses praying for his people.  One of the things Moses did a lot of, was to intercede before Yahweh for the people.

Raising your arms is an ancient posture of prayer.  If you visit the catacombs outside of Rome you can still see today images of the first Christians standing with their arms outstretched in prayer.  We call it the “orans” position. Because it symbolizes lifting our prayers up to heaven, up to our God.

In Psalm 140 David described this kind of prayer beautifully, “Let my prayer come before you like incense, the raising of my hands like the evening offering.”  So this ancient orans position is at the very least 3,000 years old, maybe even 4,000 years old.

And that’s why Fr. Gary uses the orans position so often during Mass.  He’s offering the collective prayers of each of us to the Father.

You see, we take absolutely serious Jesus command on Holy Thursday, do this in memory of me.  Or to use the more precise words from First Corinthians, “This chalice is the new covenant in my blood.  Do this as often as you drink it, in remembrance of me.”

What makes the Eucharist so valuable is its completeness – the Eucharist is a sacred way to transcend time and to actually be with Jesus at the Last Supper, to be with Him during His Passion and death, and to rejoice in His resurrection from the dead.  All three of those components packed into one continuous prayer.

The Eucharist is special in another way, too.  It is a prayer that is offered by the Son to the Father, through the Holy Spirit.  A prayer that shows the love and connectedness of the Holy Trinity each and every time we participate in it.

Much of what is pre-figured in the Old Testament is perfected in the New.  The Last Supper that Jesus celebrated with his Apostles on Holy Thursday was a perfection, a completion of the Passover.  The sacrifice of a lamb for each family was perfected by the offering of the Lamb of God to the Father.  The instruction to place blood on the door frames and lintels was perfected by the blood that fell from the arm and the tree of the cross.

And the ancient manner of prayer – the way in which Moses lifted up his hands to assist his army; the way in which David lifted his hands before the Ark of the Covenant; the way in which the earliest Christians offered their prayers in the catacombs – this very posture was perfected by Jesus as well when He turned his wrists and had them nailed to the cross.

Jesus lived out Psalm 140 in the most beautiful and complete way:  Not only was his prayer like incense, his whole life was lifted up to the Father; not only were His hands raised like the evening offering, they became the eternal offering – the offering that redeemed the entire world.

So the next time you raise your arms in prayer, thank our Lord Jesus for the unique way that He stretched out his hands for love of you.